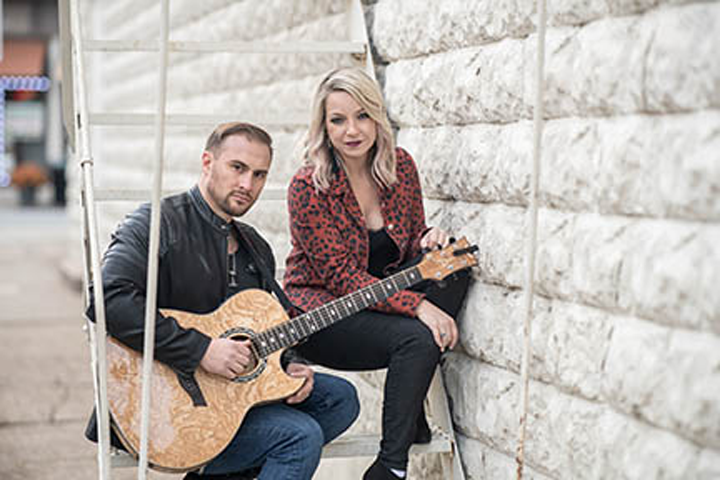 MORRIS COUNTY — MPAC launched its Friday Facebook Live series on Friday, April 10. MPAC plans to air a new live concert every Friday for the next four to six weeks. Concerts are recorded and can be viewed at later dates. The concert will take place on April 24 at 12:30 p.m., featuring country duo October Rose. The concert can be viewed on MPAC’s Facebook page by clicking here.

Passion. Drive. Determination. That’s what Leanne Weiss and Derek Allan bring to country music. You won’t find them sitting still, nor can you try to stop them.

Long before their formation as country duo October Rose, these two were separately chasing similar dreams with the same level of ambition, but in different states.

Growing up in the suburbs of Northern New Jersey, Leanne idolized vocalists like Celine Dion and Barbra Streisand, writing songs through her teenage years and performing wherever she could in whatever genre she could. After about divine inspiration, Weiss took a chance and recorded her first country EP. “I saw Carrie Underwood in concert, and couldn’t sleep that night. My desire to pursue my dreams was so strong.” Weiss quickly garnered opening slots for Kenny Rogers, Dierks Bentley, Michael Ray, Russell Dickerson, and Kristian Bush of Sugarland, plus shows at classic venues like Nashville’s The Bluebird. Despite her success, she considered throwing in the towel and putting her music career on hold. “I was feeling frustrated,” says Leanne. “I didn’t know what my next move would be after three years of recording and performing.”

Three hundred and sixty-five miles away in the suburbs of Pittsburgh, Derek was on a musical journey that began at age 11, when his mom gave him a gift that would change his life—his first guitar. “She bought my dad, my brother, and me guitars for my dad’s birthday,” Derek recalls. “I started taking lessons.” He actively honed his skills as a musician, songwriter, singer—and bodybuilder. Though growing up partial to 80’s hair metal bands like Warrant and Def Leppard, it was undeniable that country music was in his blood. Before long, Derek was performing his original songs and quickly establishing himself in the Pittsburgh music scene. Opening slots for prominent bands like The Stickers were paving the way for him to make his mark in his home city.

Then in early 2016, a job change brought Derek to New Jersey, unaware of the story that fate had in store for both he and Leanne. After stumbling across Leanne’s music video, Derek contacted her via Facebook, wanting to make some new friends in country music. The two chatted and Derek came out to one of her shows. “I wound up sitting next to her mom, who talked her daughter up,” says Derek. When Leanne took the stage with her band, Derek knew mom was right. The two met after the show and became fast friends, hanging out and writing music together. “When we started harmonizing together, it was like the world stopped,” says Leanne. “We knew we had something incredible.” Suffice it to say, she wasn’t about to give up on music anytime soon, and fate was moving her into a new direction. Derek knew then his move to New Jersey was his destiny.

Since their formation, October Rose’s momentum grows stronger by the day. “Heartbreak Song,” the emotional song that started it all, gained critical acclaim and traction on the country music charts. And with a rigorous schedule of performing all over the country, this duo continues to win audiences over with their energetic stage performances.

Their debut EP, “All In” features six songs, including the motivational title track. “All In” is our follow-up to ‘Heartbreak Song,” in that it epitomizes the strength of our partnership as a duo and our desire to go ‘all in’ with our dreams,” says Derek.