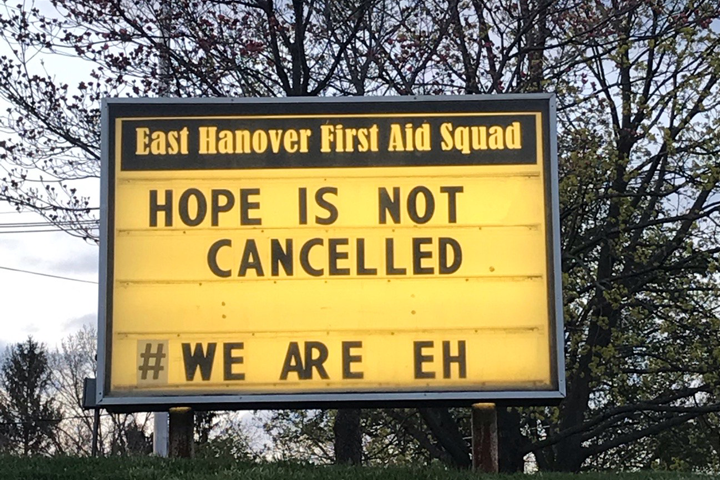 He is a volunteer for the East Hanover Emergency Medical Service and works for Atlantic Mobile Health and an EMT. But, it was mid-March and COVID-19 was spreading quickly throughout New Jersey.

As he was admitted, gowned up, and moved to a room, the thought of testing positive ran through his mind. For that entire evening and the next day, alone in a room he waited. No visitors were allowed, but calls and texts connected him with his family during this rough time. A CT scan confirmed pneumonia. He was sent home the next day with a stealth antibiotic and the stress of waiting for the test results.

The call came one day later. He tested positive for COVID-19. His brain quickly recalled the weeks prior; who he saw, who he worked with, his parents, his siblings. It wasn’t fear that gripped him, it was reality mixed with a bit of relief. Relief of being sent home to recover which was much better than being alone in a hospital.

Cardoso serves as a volunteer for East Hanover Volunteer EMS for more than a year and East Hanover OEM since 2018. He is a graduate of Hanover Park High School where he was a student leader for several service clubs that mentored elementary school students, and supported local charities and small businesses.

He was an intern for a local newspaper and recognized as the 2018 Caring Student of the Year. He is a member of the Knights of Columbus East Hanover Council and serves as an Usher and Eucharistic Minister at St. Rose of Lima church. He recently responded to requests for communion at home. He is a servant’s servant.

One night in 2018, Cardoso was driving home from work in Fairfield and noticed thick smoke rising over a home on the side street he was approaching. Without hesitation he drove to the house as local law enforcement arrived. He remained with the officers until first responders secured the home, to ensure all was well. That night changed his life.

Not long after his second semester at Montclair State University he submitted an application to Emergency Medical Technical School and began four months of intense training. He became a nationally registered EMT in December 2019, long before Target ran out of hand sanitizer, and nearly every St. Patrick’s Day parade was postponed, due to COVID-19. It was his time.

Cardoso’s first day on the job for Atlantic was March 18, the same week that a National Emergency was declared due to the COVID-19 Pandemic. He gloved up, got behind the wheel, and spent his hours not just giving those suffering a ride, he gave then comfort. Shortly thereafter, he was diagnosed with COVID-19 and would be out of commission for almost 22 days. The East Hanover OEM, law enforcement, and community leaders had plans in place to keep residents safe informed and hopeful. As he lay in his bed, slowly recovering, he recalled those moments realizing the love and encouragement he expressed was exactly what he needed himself.

“Caring for patients before and during the COVID-19 pandemic was what I love to do. Keeping them safe and reassuring them that in their darkest hour, I would be with them was what I did. Sometimes I guess I became so used to caring for others, it was hard for me to realize it was my time to step back and be taken care of” he shared.

The messages of love and support came pouring in through text and phone calls, social media, and drive-bys. Local leaders checked in regularly, and he remained in close contact with his doctors through Telehealth. Mentally he grew stronger and physically he progressed. The return appointment to confirm full recovery was in reach. He started to feel more like himself, and that meant one thing, time to return to his post. That day came, and he was flooded with the expedient nature of a “positive test result” and PTSD that came with it. But the chest CT scan was clear, and he had just a few more days before he could return to work on the front lines, fighting the COVID-19 pandemic. The timing of his return to work was, again, remarkable.

His first order was to take part in a (click here) “Thank You Heroes” procession through St. Barnabas Medical Center. Law enforcement and first responders from several neighboring towns participated as doctors, nurses and medical professionals lined the sidewalks and windows in appreciation. It was there that Cardoso was able to personally thank the heroes that took care of him, a day he will never forget. “I remember sitting in my hospital bed while I was admitted. Scared and alone I wondered what it would finally be like to be out of there, healthy and to return to a semi-normal life. The Doctors, Nurses, and Nurse Practitioners took the best care of me. My goal was to heal in time and return to St. Barnabas with EH Vol. EMS to not only thank everyone at the hospital for their hard work but to personally thank those health care heroes who saved my life.”

The next day, feeling healthy and humbly grateful, he and his EHEMS colleagues added a special message to the billboard in the parking lot of the building, which read “Hope is NOT Cancelled,” along with Superintendent of schools Natalie Bartlett’s famous hashtag #WeAreEH, which now, hit home more than ever. One week later, Cardoso was able to return to work, beginning with night shifts for Atlantic Mobile Health with a fresh perspective, and renewed strength, helping those who were also infected with the virus and once again doing what he loves to care for others.

“I am so thankful and blessed to live in a community that cares so deeply for their own. From all of my Brothers and Sisters at EH Vol. EMS who checked in, brought meals to my Brother Knights and St. Rose of Lima Family for all of the Prayers, I am truly thankful for the outpouring of support and love I received. It was a true display of family that we have here in East Hanover,” Cardoso added.

“To the Doctors and Nurses at St. Barnabas Medical Center thank you. For the care and support, you gave me. Not only medically but to be in a hospital alone in such a hard time would be impossible without a support system of caring individuals to check in on you”

Later that same week, all of New Jersey, especially East Hanover, watched the #Jersey4Jersey relief concert, where that same message of hope encouraged thousands of viewers. It most definitely is Matt Cardoso’s time.