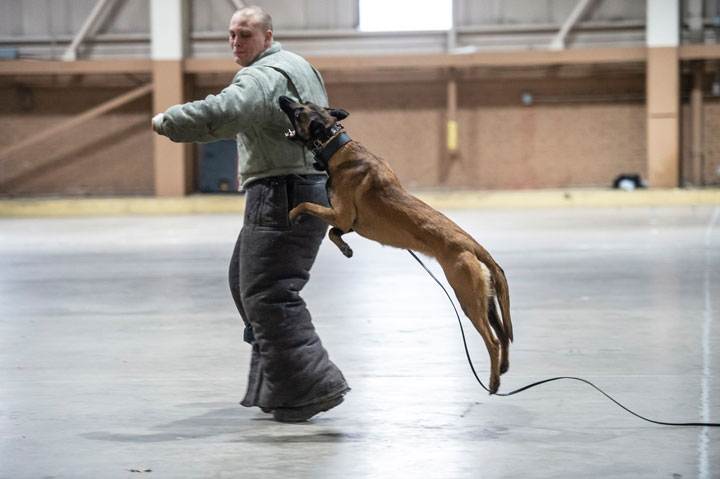 “The seminar was a vital opportunity for K-9 teams to learn from premier leaders how to deploy K-9s under specific scenarios to stop suspected violent offenders while keeping the community, themselves and their dogs safe,” Morris County Sheriff James M. Gannon said.

The seminar focused on training officers to be decoys skilled at drawing out behaviors in the dogs that hone their abilities to apprehend and hold suspects. The decoys, protected by their bulky padded suits, played the role of suspects trying to flee while other officers and handlers deployed the dogs with commands.  Handlers do not act as decoys to their own dogs.

Since decoy work is physically taxing on the officer, the seminar also provided instruction to officers on how to avoid injuries to themselves and the pursuing K-9. “For the dog, apprehension is the reward. The decoy is a big toy they get to possess and obtain,” Tomasini said.

Tomasini said K-9s very rarely are commanded in Morris County to chase and bite suspects, and only after verbal warnings are first given to a suspect. But K-9 deployment is an important tool for use against non-compliant criminal suspects and all commands to the dogs to apprehend and hold come from their handlers who are trained in proper use of force, Tomasini said.

“We have a tool we may utilize for the safety of fellow officers, as well as the community, that’s able to stop the threat,” he said.

Morris County Sheriff’s Officers assigned to the K-9 section use Belgian Malinois, German and Dutch shepherds in their work that can involve responses to multiple calls in one day. The section is a shared service, available to all municipalities and law enforcement agencies in the county.

In 2018, the K-9 section logged 854 calls and sweeps. The statistics include 518 callouts for narcotics, bomb, arson, patrol, and search and rescue endeavors, and 336 protective sweeps of Morris County facilities.

The dogs are so highly trained they hear and obey only their handler’s voice commands while working, with the ability to block out noises or words that may be uttered by a fleeing suspect, Tomasini said.