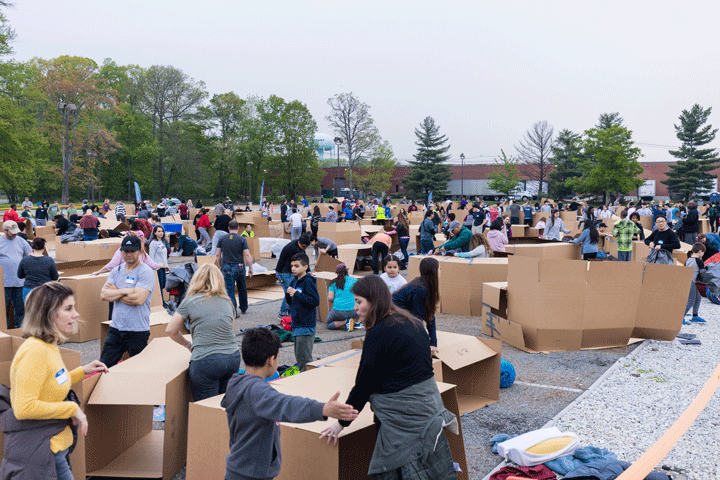 PARSIPPANY — On Saturday, May 4, one of New Jersey’s fastest-growing churches and recently ranked #43 in Outreach Magazine’s list of the Top 100 Fastest-Growing Churches In America, Liquid Church, stepped away from social media and modern comforts to sleep outside for a cause: To raise awareness and life-giving resources for the homeless population in New Jersey.

Homelessness has spiked in New Jersey – and today, more families, teens, and veterans are finding themselves without shelter and security. As of January 2019, nearly 10,000 people in the state experienced homelessness, which is a 9% increase since 2017 reports.

Over 500 participants slept outside at two locations, Parsippany and Sayreville o raise a grand total of $50,000 for New York City Relief

For each person who slept out overnight in Liquid’s “cardboard city,” during their Homeless Church event, Liquid will donate $30.00 to the ministry of New York City Relief in celebration of the organization’s 30th Anniversary. Each $30.00 donation will give New York City Relief the ability to provide an individual on the street with four servings of food and drink, two hygiene kits, and one metro card. They were blessed by an anonymous donor who doubled our donations, so instead of $30.00, $60.00 was given on behalf of every participant.

“Serving the poor and homeless is central to our ministry of compassion at Liquid Church. As Christians, we know it’s not enough to sympathize with the homeless…We must take action!” said Tim Lucas, lead pastor and founder of Liquid Church. “Several years back, I spent one night on the streets around Newark Penn Station in an attempt on my part to understand, in a small way, the challenges of being homeless. This experience expanded my heart for our friends living on the streets, and it’s why today, Liquid Church is committed to serving alongside incredible organizations like New York City Relief.”

The event continued until Sunday, May 5 at 8:00 a.m. with a breakfast and special service at Liquid Church.

“At New York City Relief we believe homelessness is a struggle, not a life sentence! That’s why our goal is to mobilize thousands of volunteers to compassionately serve those struggling with homelessness by providing hope and resources that lead towards life transformation,” said Juan Galloway, President & CEO of New York City Relief. “Since we were founded in 1989, we have served alongside so many churches who go the extra mile to love our brothers and sisters on the streets, and we look forward to continuing to partner with Liquid Church as they seek to catch God’s heart for the homeless on May 4.”