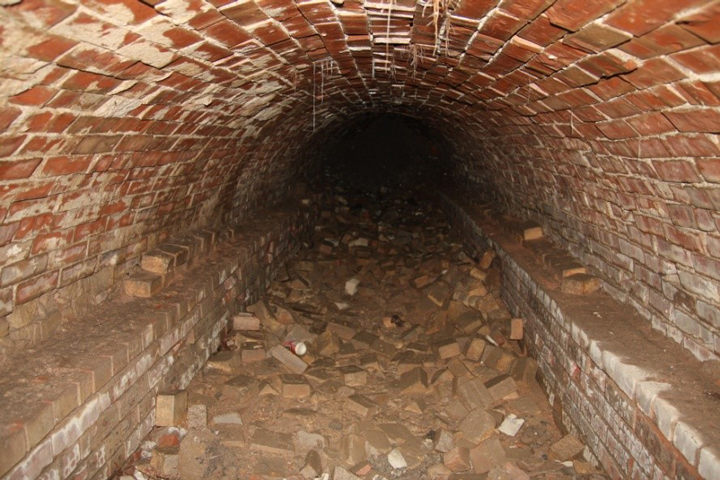 HANOVER TOWNSHIP — 2020 is Hanover Township’s Tricentennial Year, so you’d think that the “big” things in our Town’s History would be known and well understood.  They are not.  One big thing – well, three of them – are the Brickyard Ponds in Bee Meadow Park.   Between 1880 and 1930 clay from them made tens of millions of bricks.

The memory of the Brickyard hides silently in all the walls built from its bricks.  Rare ones have been found with finger or toe marks left by a workman. Memory is also submerged in large, water-filled holes. These are the remnants of the work done by the sweating men of the Hanover Brick company. They dug clay until the company closed, and the holes filled with water.  We now call them ponds.

Hanover Township is now building a walking trail around the ponds. During construction, a backhoe broke into one of the remaining tunnels in the Brickyard. The tunnel is made of brick, five feet tall, and shaped like a keyhole.  The round sides of each end are foot-wide shelves, two feet high. At the bottom of the tunnel, tracks remain.

These tunnels are mostly remembered by locals as, “there were a lot of them,” and “we played in them as kids.”  No one knows what they were for, how many there were, or where they all were. There are no maps of the Brick Yard, but we are looking for old ones.

There are other mysteries associated with the Brickyard. Legend maintains that its clay was both wonderful for brickmaking and uniquely colored.  Does it extend under many of our Hanover Township backyards?

Unknowns also surround why the brickyard closed in 1931. According to legend, the pit got so deep it hit a spring, and the pit filled in overnight and forced the company to close.  How deep are the ponds?  Are there digging machines at the bottom?  More likely, the Great Depression at that time caused the demand for bricks to plummet.

Those who attend Recreation’s summer concerts will see the mouths of two, sealed tunnels remaining on Bee Meadow field. We are told that there once was a vault under the parking lot.   We don’t know — it’s another mystery.

The recently exposed tunnel has been secured for safety reasons, but the Landmark Commission is looking to develop plans to expose it and give a view of a remnant of our history and to remind everyone of time from a past era when a “good job” meant making bricks out of clay. The brickmaking-profession is thousands of years old and even mentioned in the Bible by Moses. Our historic brickyard is ‘modern’ by comparison to biblical times.  You’d think by now we’d understand how ours operated.

Landmark is seeking information from anyone who can solve the Brickyard’s mysteries so that our history will be made clearer. This is not just for our Tricentennial, but also for children in years to come to give them an understanding of our heritage of hard work.

If you have any information that might help the Landmark Commission solve the mysteries of the Brickyard, contact Landmark Chair, Mike Czuchnicki by e-mailing him at MikeCz@bemorebetterbooks.com.

Be sure to check the Township website, and local newspapers for future articles about your community’s historic treasures and plans to commemorate the Township’s Tri-centennial later this year.

Mail Stolen from Residential Mailboxes at Several Homes in Hanover