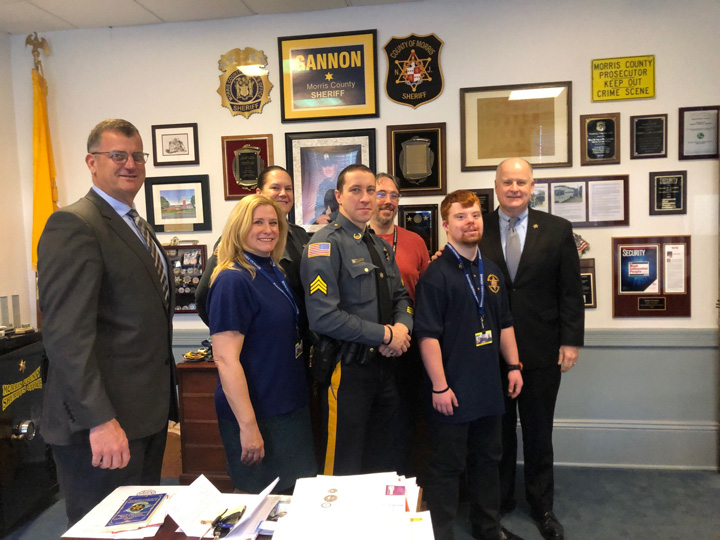 MORRIS COUNTY  — Kevin Hasenbein, a 19-year-old who has proved his talent on the Morristown High School football field, has scored a spring internship with the Morris County Sheriff’s Office.

Kevin, who has Down Syndrome, officially started his new position February 4 fulfilling tasks alongside Sheriff’s Office detectives in the Evidence Section.

His internship, slated to run through June 24, involves Kevin working at the Superior Courthouse on Mondays and in the Evidence Section on Wednesdays.

Kevin also is completing a separate internship on Tuesdays and Thursdays with the Civil Division of the Superior Court in Morristown.

Kevin, in 2018, obtained his Morristown High School diploma after fulfilling his graduation requirements at a school in Chatham. He returned to Morristown High School in the fall to participate in its Colonial Learning Independence For Employment, known as the Colonial L.I.F.E. program, which assists 18 to 21-year-old individuals in learning basic employment skills.

Kevin’s younger brother, Eric, plays for the high school’s Colonials football team and Kevin is an honorary member and ardent fan. The Colonials arranged for Kevin to suit up for the Homecoming game and participate in a dazzling play in which he outran players to carry the ball 80 yards into the end zone to score a touchdown.

“Kevin is very personable. He’s like a rock star at school. He’s always got a smile on his face and is truly a pleasure to be around,” Herbert said.