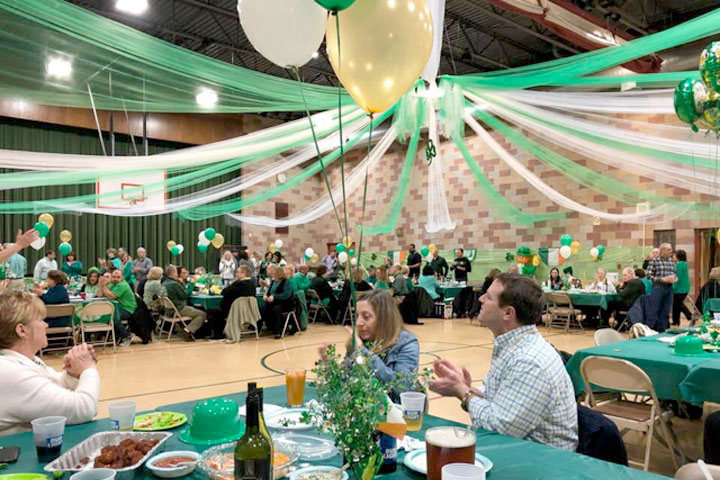 HANOVER TOWNSHIP — The Elizabeth Ann Seton Knights of Columbus #6904 resurrected their annual St. Patrick’s Day Party after being dormant for three years on Saturday, March 16.  The festivities kicked off with a prayer from Deacon Vincent Lobelo followed by a delicious meal of corned beef, cabbage and all the trimmings served by the Knights of Columbus at the Parish Hall of Our Lady of Mercy Church in Whippany.

Father Paddy O’Donovan (this year’s grand marshall of the Morristown St. Patrick’s Day Parade) provided a prayer and then sang Danny Boy to a crowd of over 170.  “We are thrilled with this year’s turnout and are very gracious for Our Lady of Mercy Church providing the venue, which we are sure will become a tradition here in Whippany,” commented Ralph Cetrulo, this year’s co-chair along with John Monahan.
The Knights of Columbus is the world’s largest Catholic fraternal service organization. Founded by Michael J. McGivney in New Haven, Connecticut, in 1882, it was named in honor of the explorer Christopher Columbus.
The Order is still true to its founding principles of charity, unity and fraternity.