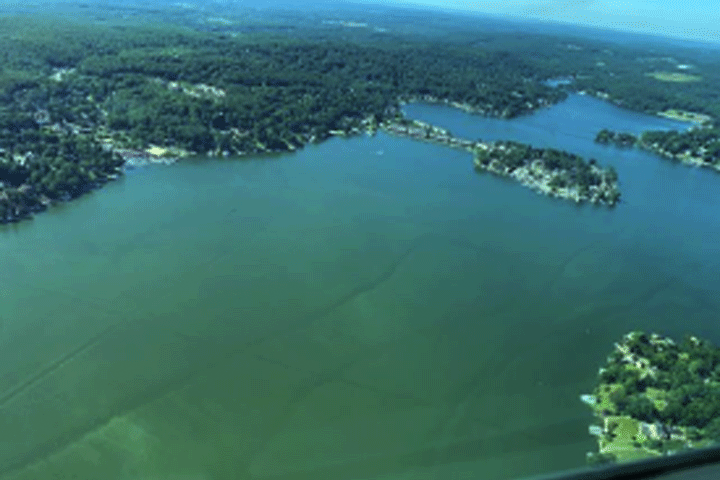 MORRIS COUNTY — The Department of Environmental Protection is advising the public to avoid swimming in or contact with Lake Hopatcong water due to an extensive Harmful Algal Bloom, or HAB, confirmed this week by aerial surveillance.

Using highly specialized sensors, the DEP’s Division of Water Monitoring and Standards’ aerial surveillance on Wednesday confirmed that large areas of Lake Hopatcong are experiencing cyanobacteria blooms. The rapid spread of the bloom may be the result of heavy rainfall carrying nutrient-laden stormwater into the lake, followed by periods of warm weather. The DEP will monitor cyanobacteria levels until the lake is determined to be safe for recreational contact. Based on the widespread nature of the HAB, the recreational advisory may be in place for weeks, if not longer. The duration of a Harmful Algal Bloom is unpredictable and may be influenced by availability of nutrients and weather conditions. In many cases in 2018, HAB was observed on water bodies well into the fall season. Often referred to as blue-green algae, cyanobacteria are not true algae but are capable of excessive growth through photosynthesis. Cyanobacteria blooms are usually a bright green, but can also appear as spilled paint, “pea soup,” or as having a thick coating or “mat” on the surface. These blooms can often be confused for typical algae blooms. Exposure can cause a range of health effects, including rashes, allergy-like reactions, flu-like symptoms, gastroenteritis, respiratory irritation, skin rashes and eye irritation.

As a precaution, the DEP is recommending that local health authorities close all public swimming beaches along the lake due to the widespread nature of the bloom. Straddled by Sussex, Passaic and Morris counties, Lake Hopatcong is New Jersey’s largest lake and is a popular tourist and vacation destination. The DEP is working through the Lake Hopatcong Commission to notify municipal governments and local health agencies of the advisory. Recreational exposure can occur while swimming, wading and during watersport activities such as jet skiing, kayaking, wind-surfing and paddle-boarding. The DEP is advising the public to avoid these activities and all contact with water from Lake Hopatcong until further notice. People also should not eat fish caught in the lake or allow pets to come in contact with lake water or drink the water. Limited blooms were reported and responded to by the DEP in Lake Hopatcong beginning on June 17. In recent days, the DEP has received more than 30 reports of HABs on Lake Hopatcong, including reports of people experiencing mild skin rashes after coming in contact with lake water.

Because monitoring indicated the blooms were becoming more widespread, the DEP conducted aerial surveillance using a highly specialized sensor to estimate cell counts. Estimated cell counts in many areas of the lake exceeded health guidance levels. The DEP is conducting ongoing water sampling to confirm levels. Cyanobacteria are naturally present in lakes and streams in low numbers. Under suitable environmental conditions – sunlight, high nutrients, warm temperatures and calm water – dense cyanobacterial blooms can form. In recent years, the DEP and the New Jersey Department of Health have been enhancing Harmful Algal Bloom surveillance and response efforts across the state. In 2017, the DEP launched a campaign to educate the public about these blooms and provide resources on how to report them to the DEP. The “Avoid It and Report It” campaign advises the public to take the following steps when a suspicious bloom is observed:

• Avoid contact with water in the vicinity of the bloom, especially in areas where the bloom is dense and forms scum;
• Do not drink or consume the water;
• Do not eat fish from the waterbody;
• Keep pets and livestock away from the water;
• Do not allow animals to drink the water, eat dried algae, or groom themselves after coming into contact with the water;
• People, pets and livestock that come into contact with a bloom should rinse off with fresh water as soon as possible;
• Seek medical attention or a veterinarian if a person or animal is experiencing adverse health effects after exposure to a bloom;
• Report a suspected HAB by calling the DEP Hotline at 1-877-WARNDEP (877-927-6337) send a mobile alert through the WARN NJDEP mobile app (available via iTunes, Google Play or Windows Phone) or report via the DEP’s HAB website by clicking here.

The state’s response strategy covers freshwater lakes, rivers, and streams with potential public access, recreational use, and freshwater bathing beaches (including licensed beaches). While these waterbodies may also be sources of drinking water in New Jersey, the focus of the response strategy is recreational use. DEP works closely with drinking water systems to plan for HABs as well as all other drinking water emergencies. The DEP’s HAB website is available by clicking here.

contains information on both freshwater cyanobacterial HABs, and a variety of marine water HABs. Highlights include an electronic cyanobacterial HAB Reporting Form, downloadable Advisory signs and flyers for use for HAB events, a general cyanobacterial fact sheet, and a more detailed fact sheet on recreational exposure and health effects related to cyanobacterial HABs. General information about cyanobacterial HABs, what to do if people or pets are exposed, links to the EPA and U.S. Centers for Disease Control’s HABs websites and other resources, as well as a gallery of both HAB and non-HAB photos of lakes and streams, are also provided. For questions regarding the freshwater harmful algal bloom strategy, call DEP’s Bureau of Freshwater and Biological Monitoring at (609) 292-0427 or email njcyanohabs@dep.nj.gov.