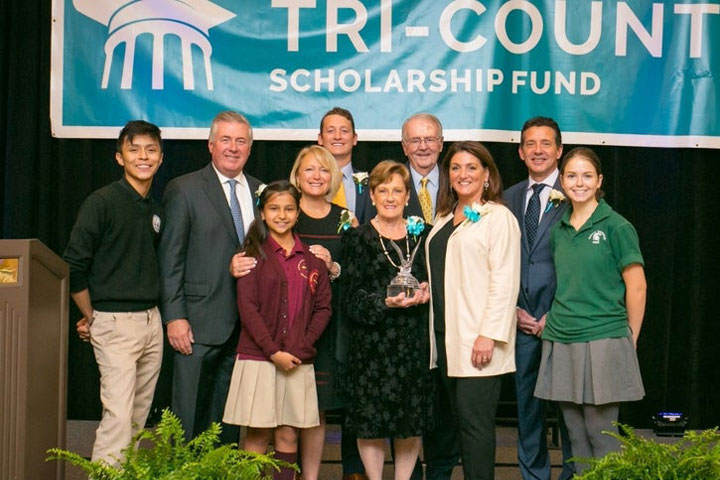 EAST HANOVER — Ray and Cathy Donovan and the Donovan Family were honored with the Making a Difference Award for their 50 years of helping inner-city children in New Jersey, and for supporting several Catholic schools and religious orders. “Ray and Cathy Donovan and their family exemplify everything that Tri-County stands for in their work to help children from underprivileged areas by providing educational opportunity at better, safer schools,” said TCSF President, Prudence Pigott.

700 business people, friends and family, clergy and religious attended the Tri-County Scholarship Fund (TCSF) Annual Awards Dinner at the Hanover Marriott on October 28 where a record breaking $1.3 million was raised to provide partial scholarships for financially disadvantaged children in Passaic, Morris, and Sussex counties, enabling them to attend accredited K-12 values-based schools. Tri-County Scholarship Fund recognized three honorees who believe in and support the TCSF mission at the dinner, which is the largest fundraiser for TCSF.Also honored at the TCSF 38th Annual Awards Dinner were Eric Andersen, Co-President of Aon, who received the Hall of Fame Award, and Douglas Kennedy, President and CEO of Peapack-Gladstone Bank who was presented with the Leadership Award, after his over 20 years of supporting scholarships through TCSF.

“We are thrilled that we raised more than $1.3 million toward scholarships, and had the opportunity to honor such accomplished individuals, who are revered in their industries and admired for their commitment to the community, and to our mission,” said Pigott.

TCSF has provided more than $27 million for more than 32,000 scholarships to deserving K-12th grade children, since its inception in 1981 by Edward Hennessy, and the late Bishop Frank Rodimer, of Paterson.