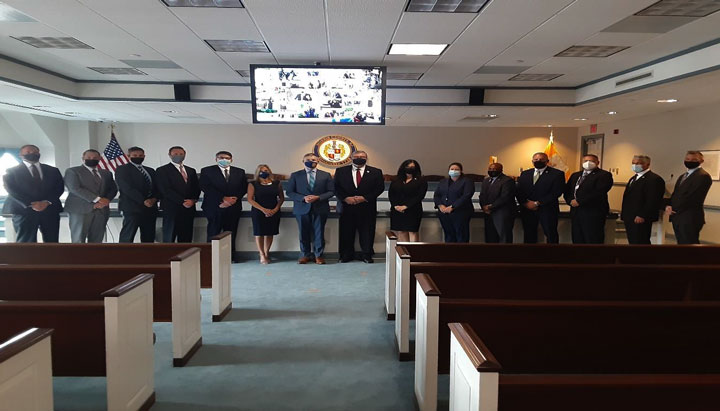 The visit was twofold, beginning with a meeting between Acting A.G. Bruck and his leadership team with Prosecutor Carroll and his supervisors during an information-sharing session; which was followed by Acting A.G. Bruck addressing the majority of Morris County Prosecutor’s Office personnel on his objectives during his tenure.

Prosecutor Carroll opened the meeting by displaying the Mission Statement of the Morris County Prosecutor’s Office, emphasizing the importance of the partnership between our communities and citizens with our law enforcement agencies all to promote a safe and secure environment, free from the fear of crime. To achieve the stated mission, the Prosecutor’s Office has enabled the four Divisions in the Prosecutor’s Office, comprised of twentyt-two operational units, with an emphasis on inter-agency cooperation and restoring positive community relations through communication.

Prosecutor Carroll was followed by Chief Kimker, who displayed and explained the Table of Organization related to investigative operations. Chief Kimker was followed by Chief Assistant Prosecutors Brad Seabury, Melanie Smith and John McNamara, and Supervising Assistant Prosecutor Chris Schellhorn, all of who gave individual presentations on a variety of topics relevant to law enforcement challenges in Morris County and discussing strategies implemented by the Prosecutor’s Office to combat those challenges. Topics presented included but were not limited to: current crime statistics and data; the (24-7) investigative and legal assistance provided by the Prosecutor’s Office to all law enforcement agencies operating in Morris County; opiate overdose and Narcan deployment statistics; gun crime, and gun seizures prompted by domestic violence incidents, as well as those due to individual mental health crises; auto theft and the nexus to other criminal activity; mental health and veteran diversion programs; robbery and homicide statistics; and the outstanding coordination between the Prosecutor’s Office and the Morris County Sheriff’s Office Crime Scene Investigation Unit and Forensic Services, that contribute towards efficient and effective investigations.

Prosecutor Carroll followed up by providing further comment, emphasizing the Prosecutor’s Office’s commitment to Mental Health issues, and the approach of proactive intervention with those suffering from mental illness before they enter the criminal justice system, which benefits everyone. The formation of a new Mental Health Diversion Program was also discussed. Some other implemented strategies to combat criminal activity discussed were: the targeting of for-profit drug dealers, as opposed to users; proactive firearms investigations; and the continued operations of the Morris County Auto Theft Task Force (ATTF), which was created by the Morris County Chiefs of Police Association, Morris County Prosecutor’s Office Intelligence Unit and the Morris County Sheriff’s Office, and has led to a reduction in auto theft within the county.

After complimenting the Prosecutor and his team on the presentation and effectiveness of the Prosecutor’s Office, Acting Attorney General Bruck addressed the majority of personnel to discuss his priorities. Initially, Acting A.G. Bruck conveyed the importance of he and his team meeting with those who participate in criminal justice in the State of New Jersey. He then discussed his desire to be effective during his tenure and will be focusing on gun violence, policing policy, and racial justice. He concluded by asking all those who serve in the criminal justice system to have and maintain integrity, decency, and urgency.

At the conclusion of the meeting, Prosecutor Carroll said, “We are honored by the visit to the Morris County Prosecutor’s Office by Acting Attorney General Bruck and his team, where we had the opportunity to convey the efforts put forth by the fine men and women of our Office towards protecting and serving those who reside in and visit Morris County. We look forward to a continued and productive relationship with the Attorney General’s Office as we navigate through current law enforcement challenges, and whatever challenges that may develop in the future.”

“I have the greatest respect for Prosecutor Carroll and his colleagues and I was delighted by the opportunity to hear more about the good work they’re doing here in Morris County,” said Acting Attorney General Bruck. “I look forward to continuing our partnership as we work together to advance public safety and build community trust.”