EAST HANOVER — One would think that after just getting back from a trip to Kansas City that I would have had enough barbeque for a while. But let us not confuse Kansas City or any American ‘low and slow’ style with traditional Portuguese barbeque.

The fact is, there are various global styles of BBQ, and each is unique in its own way. When I asked Portuguese Master Chef Tony Abilio about this he stated, “Portuguese BBQ, also known as a Churrascaria, certainly differs from American BBQ, all our meat is seasoned with a traditional, savory Piri-Piri marinade, consisting of African Bird’s eye Chili, garlic and spices; there is no sugar added. Throughout the several regions of Portugal, they all have their own unique coveted recipe, but most, if not all must include the Piri-Piri pepper. The meat is roasted over hardwood charcoal, and during the cooking process it is lathered with the Piri-Piri sauce, giving it a unique light smoke flavor and spicy tang.”

Portugalo Barbeque, which opened in October 2020 under new owner, Kevin Hernandez, and is located on a side street directly off Ridgedale Avenue in East Hanover on Ronald Drive (look for the colorful six-foot rooster outside). Chef Kevin came to the U.S.A. in 2008 and decided to pursue his love of cooking. He found work in several area restaurants in Morristown and East Hanover, honing his skills and developing his talent, finally as a kitchen manager at Rezza Trattoria e Pizza Romana in Roseland prior to opening up Portugalo BBQ, his first venture. An exceptionally talented cook, intelligent, and amiable young man, I have no doubt of his continued success.

Although a small venue, the restaurant is cozy, comfortable, casual, and sparkling clean. It exudes a friendly, family-style vibe inside, and even though it is small, it is nicely lighted and decorated. Take note, there are only three or four tables available for inside dining, along with some counter-style seating. There is plenty of comfortable seating outside with a protected overhang, and I understand they will have patio heaters in the cooler weather for those so inclined to dine outdoors. During my visit, I did eat al fresco because of the size of my group, and it was genuinely nice, beautifully decorated, and comfortable. The owner and staff are all very friendly, prompt, attentive, accommodating, and readily available to assist you with any needs or questions you may have. It did appear during my visit that Portugalo does do a vibrant take-out business. And Portugalo Barbeque is a BYOB, so I did bring along my favorite Portuguese vino.

As I said earlier, I went with a large group during this visit and the staff clearly went above and beyond preparing and ensuring us an excellent overall dining experience. The outside tables were nicely appointed and arranged to ensure everyone’s comfort. After we were all greeted and welcomed to the restaurant by the owner the banquet we were about to experience began.

We started with the appetizers; Portuguese Chouriço Sausage Buns right out of the oven; homemade sourdough bread, soft, chewy, and delicious, followed by Caldo Verde, an iconic traditional, hearty, and famous Portuguese soup. The soup is green in color and made with a particular dark green cabbage that is not widely available beyond Portugal’s borders. Ours was prepared using collard greens. (Some restaurants use Kale). Full of wonderful aromas and flavors from the combination of potato puree, slices of chouriço sausage, and Portuguese olive oil, completed this delicious and hearty soup.

Next to reach our table was that Portuguese/Spanish classic, perfectly prepared Chorizo and Shrimp and Garlic. The aromas themselves put your taste buds into high gear. That salty, smoky, slightly sweet flavor of the chorizo perfectly accompanied the divine flavor combination of olive oil, lemon, and garlic, all of which added to the vibrant taste of the shrimp, and which married perfectly with the savory chorizo. Always one of my favorite appetizers when dining out in a Portuguese/Spanish restaurant.

Portugalo Picadinho was the next to arrive. The combination of pork and shrimp served in a savory, yet slightly spicy sauce was a taste treat and was outstanding with right out of the oven-baked crusty Portuguese Grandma Rolls (Trinchado). Amazing flavors are incorporated into this dish. Also on the table by this time were sides of Spanish Potato Chips (thinly sliced potatoes, slow-cooked at a low temperature in extra virgin olive oil with an amazing crunch) and French fries.

As we were enjoying our appetizers, wine, and conversation, our entrees, which included barbequed chicken and ribs, were being prepared on Portugalo’s authentic wood-fired grille. Servings were paced perfectly, allowing everyone the opportunity to fully enjoy each serving before moving on to the next. The portion sizes were generous, and after finishing the appetizers it was hard to imagine that the entrees were still to come. 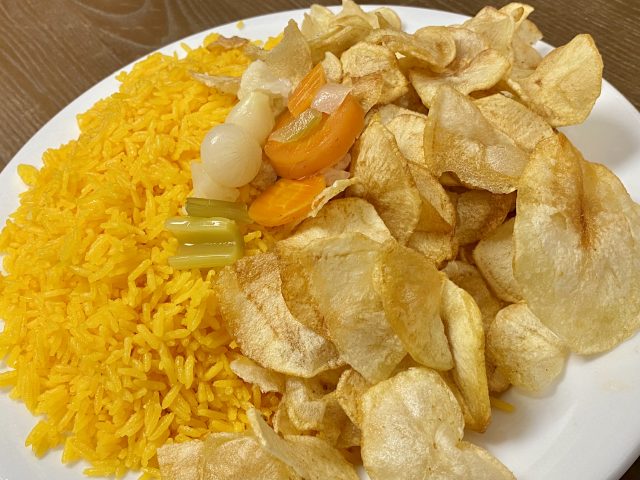 Someone from the table referred to the Portuguese Barbequed Ribs as heaven on the bone. These savory treats were expertly cooked and seasoned, fall off the bone, fresh, soft, moist, juicy, and flavorful. It was a hard choice between the beautiful ribs and the Portuguese Barbequed Chicken. The seasonings and marinades used to prepare both these entrees were masterful. I had to do the right thing, so I decided to take a serving of both. In the end, it came out a tie as to which one was better. Of course, what would these great dishes be without the accompanying side dishes of rice, beans, and potatoes, and there were ample amounts of everything. 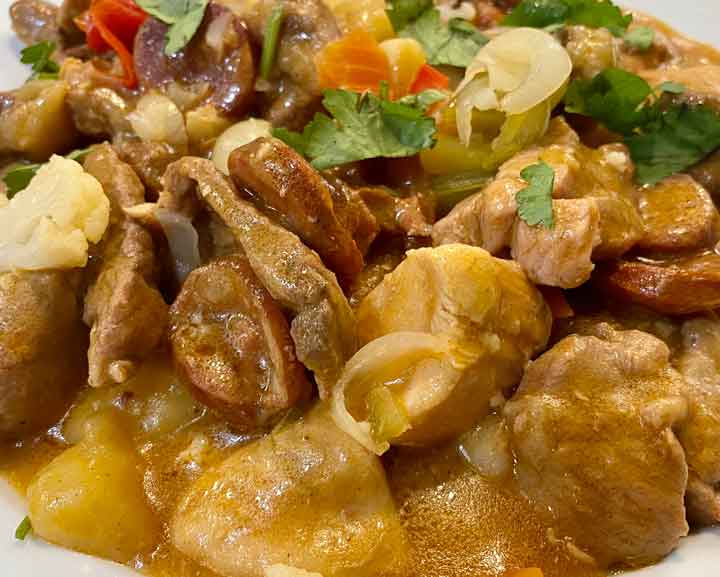 Dessert was no slouch either. Several Pão de Ló, Portuguese Sponge cakes appeared, still warm from the oven, along with Serradura; whipped sweet cream layered with crumbled Portuguese cookies. I had never had this before, but I would never turn it down if offered again. Decadently delicious, and went great with espresso, with a dash of Cuarenta y Tres, to wash it all down.

So, when you are in the mood for some Portuguese cuisine, give yourself a treat, and give Portugalo Barbeque a try. Obviously, I would recommend it. As someone who often finds myself traveling to Ironbound for a Portuguese/Spanish dinner, I can now satisfy that urge with a short visit to East Hanover. Obrigado to our hosts, Kevin and Tony, and the staff at Portugalo for the tremendous hospitality.

Just as an end note Portugalo Barbeque does offer a limited but inviting menu which includes various Portuguese traditional favorites, and if pre-ordered they can prepare other special orders, including “Leitao”, a slow-roasted whole pig.

Interesting fact: Portugal Is the Oldest Country in Europe.