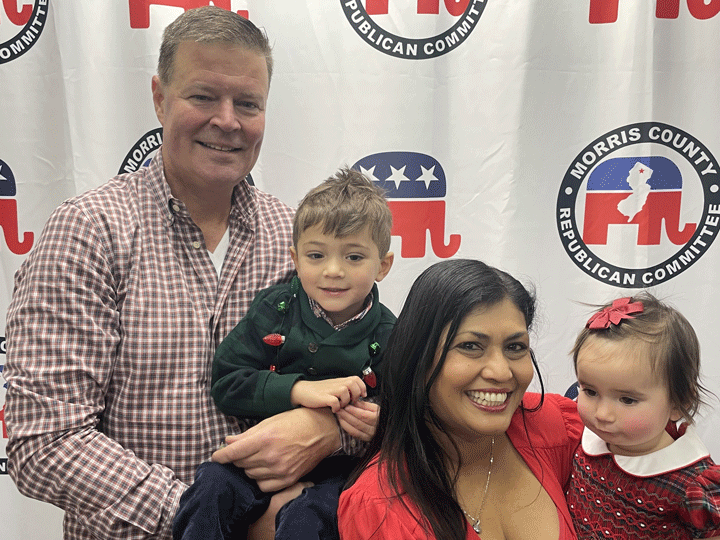 MORRIS COUNTY — Cops murdered and attacked; rioting and looting running rampant in American cities, defunding police and revolving door justice. This is the legacy of Joe Biden and the Progressive Democrats such as Rep. Mikie Sherrill (D-NJ CD-11).

Their misguided approach to crime is to treat it as social justice issue, which forgives bad actors for their crimes because of their race, poor upbringing or lousy schooling. As a so-called former prosecutor, Mikie Sherrill should know better.

Millions upon millions of minorities and poor people go through life without committing crimes. But they are often the victims of crimes by the same people that the liberal Democrats are trying to protect.

Just last month (January 2022) an innocent honor roll student, Robert Cudra, was shot through the head on a Paterson street by a stray bullet as he was taking in groceries for his grandmother. (Click here)

The response from the left was a deafening silence. No NBA or NFL stars came forward to denounce the senseless killing or console the family. Nothing from our Democrat leaders.

Paterson is not some far-off country. It is a town that is only minutes away from where your family and mine live. Paterson is the city where I made my living as a county prosecutor for 25 years. I devoted each day to putting bad guys in jail.

I care about Robert and many thousands like him because I know this young man deserves a chance in life, a chance that he is not getting because progressive policies are hurting, not just the people who live in Paterson, but people in your community. Emboldened criminals are spreading out to the suburbs, stealing cars, breaking into houses, and flouting the law.  Last year there were 350 reported burglaries in Morris County and 213 stolen cars in Parsippany. Recently police stopped a man walking down the street in Caldwell; he was carrying a loaded handgun with the serial number scratched off.

Confounded by the failure of their liberal policies such as bail reform, to keep people and property safe, the Democrats are floundering for answers. They keep coming up with the wrong ones.

Neither President Biden nor Congresswoman Sherrill can bring themselves to blame the people responsible. The criminals themselves. Sherrill has been silent on crime except to support The Justice in Policing Act of 2020: which was spearheaded by notorious and preachy liberal U.S. Sen. Cory Booker – the failed mayor of Newark.  The Act does nothing to help police fight crime, but it does put a tremendous onus on police officers who are trying to fight crime. The Act makes police suspects from the start.

Recently our often-confused President took to the airwaves to share his thoughts on how to reduce violent crime in cities such as New York (452 murders in 2021) Philadelphia (562 murders) and Chicago (800 murders) where liberal officials have been engaging in crime-excusing and failing to prosecute criminals. The President’s approach is at best naive, at worst dangerous to Americans no matter where they live.

Like most liberals, Biden can’t bring himself to blame individuals for crime. Instead, he blames inanimate objects. It’s the guns that are a problem – not the people using them. The solution: get guns off the streets and shut down rogue gun makers?

As a career prosecutor, I’m not sure what the president means by rogue gun makers, where they are or what their role is in murder. Neither is he nor Rep. Sherrill, I bet.

Gun buy-back programs have been tried in cities small and large. They are mostly publicity stunts that garner a lot of old and forgotten weapons and a few photo-ops. Hardened criminals and gang members are NOT going to turn in their guns for a few dollars.

Besides, many serious crimes are committed with knives and bats. Recently a woman in the liberal bastion of Seattle was struck violently in the back of the head by a man wielding a baseball bat. Are bats the problem? (Click here)

Democrat politicians are slowly waking up to the idea that their soft-on-crime policies are unpopular everywhere. So, in New Jersey they have come up with a quick legislative solution: keep people who commit crimes with guns in jail before their trials. I’m sure the ACLU will have a problem with that.

The proposed Jersey legislation is another quick public relation hit. Why deny bail or set incredibly high bail limits only for people who use a gun to commit a crime. How about using the same logic – that these people are a danger to others — and applying it to all sorts of violent offenders. The liberal excuse-makers will never take it that far.

As a prosecutor who actually worked to punish criminals, I know that if there are no consequences for criminal activity, we get more crime – whether it is looting, burglary, or shootings.

The certainty of punishment reduces crime and takes bad actors off the streets. As your congressman, I will make sure America does not continue its drift into lawlessness. I can’t say the same for Rep. Sherrill.

This press release was submitted by Paul DeGroot. He served as a Passaic County Prosecutor for 25 years. He is now a lawyer in private proactive and lives in Montville, Morris County