MORRIS COUNTY — Morris County’s Board of County Commissioners last night joined members of the local Ukrainian community in a moment of silence and sang the Ukraine national anthem as the board presented a formal resolution declaring solidarity with the Ukrainian people against the ongoing Russian invasion of Ukraine in Eastern Europe.

The Ukrainian community, an estimated 12,000 people living in and around Morris County, have been an active part of the region for over 100 years, and a dozen of them joined community leader Myron Bytz in accepting the framed, signed, and sealed resolution during the Commissioners’ public meeting in Morristown. 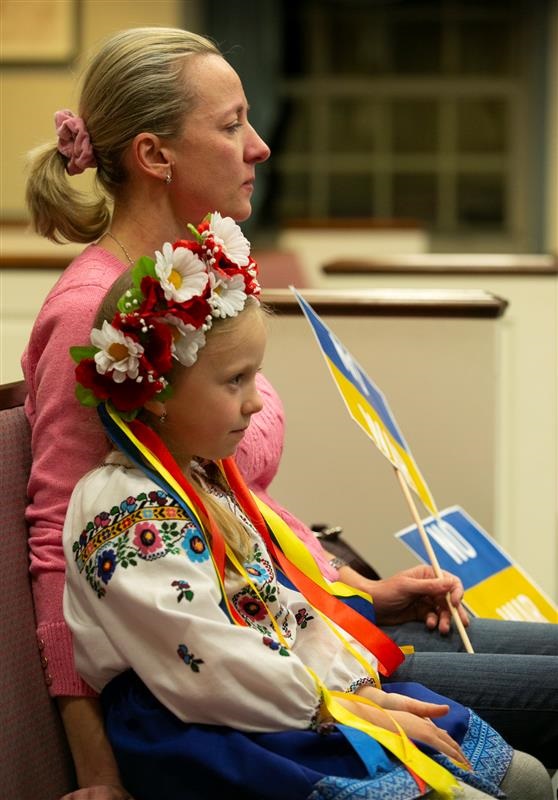 “Commissioners, ladies and gentlemen, on behalf of all Ukrainians, thank you for your support,” said Bytz, who was accompanied by his wife, Christina, and grandson, Atlas.

“As President Zelensky stated, we Ukrainians are a peaceful nation, but if we remain silent today, we will be gone tomorrow. I say, thank you world for speaking out on our behalf, and for your support. We will not be gone tomorrow or ever. Glory to Ukraine. Glory to the heroes,” he added.

The group sang the Ukraine national anthem with their hands held over their hearts, and held two moments of silence with the Commissioners in an emotional gathering.

“The situation on the ground is one of horror. Neighborhoods have been destroyed. Civilians have been deliberately targeted for attacks and hundreds have been killed. Two million people who once lived peaceful, hardworking lives in Ukraine have been forced to flee their beloved nation,” said Commissioner Director Tayfun Selen. “Tonight, my fellow Commissioners and I are declaring our solidarity with Ukraine and the Ukrainian people against the truly evil onslaught brought down on their homeland by Vladimir Putin.”

Bytz also presented the Commissioners with a Ukrainian flag, which was hung from the meeting room dais.

Everyone interested in donating funds and goods – with medical supplies being a top priority – was urged by Bytz to connect with the Ukrainian American Cultural Center of New Jersey by clicking here.

The full wording of the Morris County resolution is below:

Whereas, the unprovoked, unjustified, and illegal invasion of the sovereign nation of Ukraine by Russia under the direction of its ruthless President, Vladimir Putin, has been condemned by the entire world, including the people of Morris County and this Morris County Board of County Commissioners; and

Whereas, the people of Ukraine have bravely resisted the relentless assaults, bombings, and crimes against peace waged by Putin and his brutal military, despite overwhelming military odds and the continuing onslaught of modern Russian military strikes against innocent, unarmed civilian populations; and

Whereas, Morris County has maintained a unique kinship with Ukraine and the Ukrainian people dating back more than a century since Ukrainian immigrants first arrived in the Whippany and Malapardis sections of Hanover Township in 1908 to find hope for a new life and employment in the many mills that once drove the regional economy; and

Whereas, it was in Whippany where those immigrants built St. John the Baptist Ukrainian Catholic Church with their own hands, establishing a community where their direct descendants continue to thrive today, significantly contributing to our wonderful way of life in Morris County and throughout the United States; and

Whereas, because of those deep community bonds, all of the people in Morris County feel the brutal Russian onslaught is being waged on our own homes and families as we watch media images of dead children, devastated neighborhoods, and thousands of Ukrainian refugees fleeing the carnage wrought upon their homeland by foreign aggressors.

Now, Therefore, Be It Resolved,  by the Board of County Commissioners, Morris County, New Jersey, that we declare solidarity with the people of Ukraine and our Ukrainian brothers and sisters here in the United States, and we demand Putin immediately withdraw his military from Ukraine, renounce his expansionist claims and rejoin the world of nations to restore war-torn Ukraine.