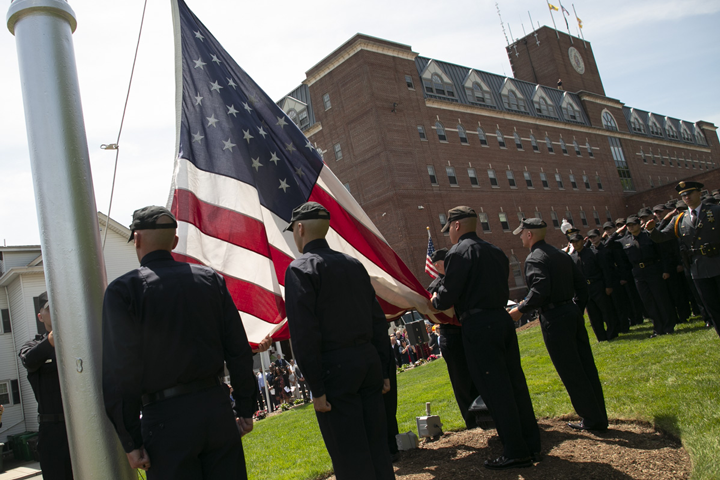 MORRIS COUNTY — The Morris County Board of County Commissioners presented their Distinguished Military Service Medals to ten veterans today at the Morris County Annual Memorial Day Observance ceremony outside the Morris County Courthouse in Morristown, where honors also were delivered by state legislators and Congressional representatives.

“These medals are unique to Morris County, and they have been awarded for well over 20 years to veterans or their family members to honor their service to our country. And we are proud to continue our tradition today,” said Commissioner Director Tayfun Selen.

“These medals began when we wanted to honor our Greatest Generation – those who fought inWorld War II. But we expanded the program to cover other times of service by our men and women, including the Korean War, Vietnam, and other conflicts when our armed forces put their lives on the line. Once again, we are officially expanding our program. This year, we will include medals specifically designed to recognize service in Operation Iraqi Freedom and Operation Enduring Freedom in Afghanistan,” said Selen. 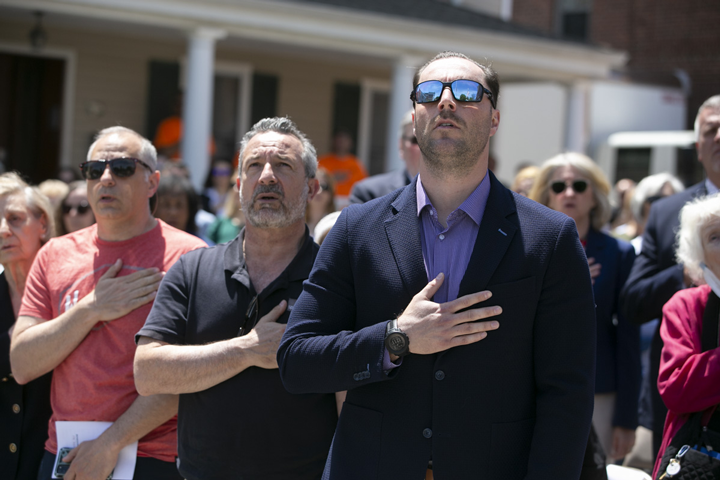 The Guest Speaker was Emerson Crooks of the VFW Post 7333 in Randolph, which is hosting the Vietnam Memorial “Moving Wall” – a half-sized replica of the Washington, D.C. monument – at the County College of Morris from July 7 through July 11. Mr. Emerson spoke of the need to continue to honor veterans, noting that the WWI Memorial and WWII Memorials in Washington, D.C. are getting fewer visitors each year and that he fears the monument to his generation’s service in Vietnam will suffer the same fate.

Father Stepan Bilyk of St. John’s Ukrainian Catholic Church in Whippany provided the invocation for the event, beginning with some remarks about Ukraine’s resilience and hope in the face of the ongoing invasion by Russian forces.

Served in the United States Marine Corps in both Operation Enduring Freedom and Operation Iraqi Freedom.

Living in North Bergen when he joined the Marine Corps, Mr. Shah served beginning in March 2002 after the terrorist attacks in New York City and Washington, D.C. the previous fall. He continued to serve through August 2010, being trained as a machine gunner and receiving commendations that included the Combat Action Ribbon, Overseas Deployment Ribbon, a Marksman Rifle Badge, the Armed Forces Reserve Medal with M device, and a Presidential Citation.

Mr. Shah now has a Master’s Degree in Business Administration, Accounting, and Finance, and he is currently employed as a corporate tax analyst. He volunteers his time organizing Toys for Tots charity campaigns.

Served in both Operation Enduring Freedom and Operation Iraqi Freedom during nearly 15-years of service with the New Jersey Army National Guard.

Mr. Barbato, who grew up in Haskell, began his service in 2008, which included deployments to Iraq, Afghanistan, Bahrain, Somalia, the Horn of Africa, and within the continental United States in response to the COVID-19 pandemic. He is still finishing his service with the military’s COVID-19 response, which he has been attached to since December 2020.

Mr. Barbato received a Masters of Social Work degree from Ramapo College, and he works part-time as a social worker and in private security. He enjoys working out at the gym and football.

Robert Kent Shaw, Boonton Township (posthumous)
Served in the Korean War after being inducted into the U.S. Army on April 11, 1951, and, upon returning from Korea on April 17, 1953, Mr. Shaw was transferred to the Army Reserves and honorably discharged on May 6, 1957.

Born in Yeadon PA on July 20, 1929, Mr. Shaw graduated as a machinist from The Williamson Free School of Mechanical Trades in Media, PA before entering the military. He served in Korea as a Private First Class with the 7th Infantry Division, also known as the Bayonet Division.

The 7th Infantry Division defended the line from Mundung-ni to the rim of “Punchbowl,” from October 1951 through March 1952. The 7th Infantry also assaulted and captured “Triangle,” “Sandy” and “Jane Russell” hills in October of 1952. Mr. Shaw was a small arms repairman who put his machinist skills to work when the parts for weapons were in short supply. He convinced his commanding officer to set up a machine shop so he could fabricate the needed parts.

After his honorable discharge, he met and married his wife, Anita, and settled in New Jersey, moving in 1967 to Mountain Lakes, where Bob liked to say that they were on vacation 365 days a year. The couple had a daughter and two sons during their 60-year marriage, and four grandchildren.

Initially, Mr. Shaw worked in the field of industrial pollution control where he became a recognized authority in paper mill wastewater treatment and an officer of the Whippany Paper Board Company. In 1973 he founded Shaw Built Homes and became a leader in the home building industry. He served as president of the Builders Association of Somerset and Morris, and he was inducted into the New Jersey Builders Hall of Fame.

In 2000 he was honored as a distinguished alumnus of the Williamson Free School of Mechanical Trades. Mr. Shaw inherited a lifelong love of fishing, hunting, boating, and the outdoors. He shared this and his enthusiasm for flying, antique cars, and photography with his family.

David Ernest Brady, Morristown
Served as a U.S Army Medical Corpsman in his term of service, from November 1964 through October 1970 during the Vietnam War.
>

William Everett Brady, Morristown
Served in the U.S. Army, stationed in Korea during the Vietnam War from June 1962 through June 1965.

Arthur Charles Schumm, Rockaway Borough
Served with the U.S. Air Force during the Vietnam War from May 2, 1968, through March 30, 1972.

Carl “Mike” Cabañas, Morristown
Served in both Operation Enduring Freedom and Operation Iraqi Freedom with the U.S. Army from Oct. 1, 2000, through July 21, 2013.

John P. Wagener, Montville
Served in the U.S. Army during the Vietnam War, from June 1957 through May 1969.

Thomas Philip Infusino, III, Montville
Served in the New Jersey Army National Guard, including a tour in Afghanistan during Operation Enduring Freedom in 2013.

Nancy M. Jones, Wharton
Served in the U.S. Army during the Vietnam War from August 1967 through September 1968.

Richard Alan Elfenbein, Flanders (posthumous)
Served in the U.S. Marine Corps during the Vietnam War from 1966 through 1968.

“Look Back On A Fallen Morris County Hero”

The Morris County Commissioners also continued a tradition of including in the annual ceremony a “We do not forget our heroes in Morris County, especially those who fall in combat or during military service.  It is traditional to remember at least one by name at our Memorial Day Observance, and this year we look back on one who suffered through one of the most brutal conflicts of our nation: The Civil War,” said Deputy Commissioner John Krickus.  “Charles Spencer’s life and service to our nation were short, and a story of the sadness and human tragedy found in every war.”