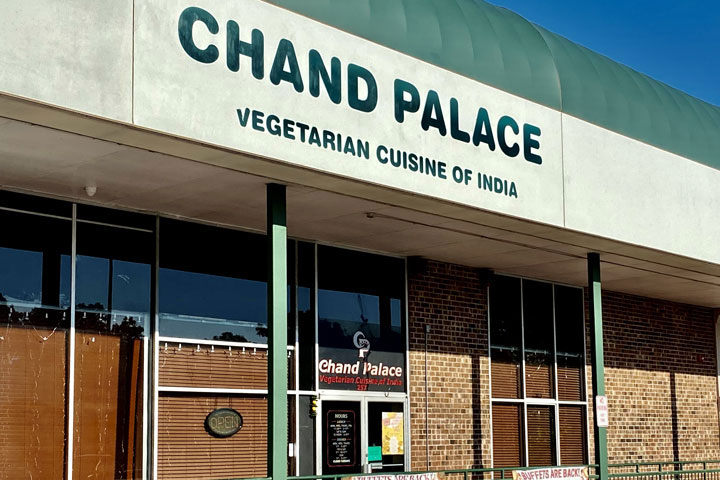 MORRIS COUNTY — There is no argument that Parsippany boasts a highly impressive and multi-diverse culinary scene that is second to none. At the intersection of Littleton and Parsippany Roads in the Littleton Plaza you will find one of the township’s longest standing Indian restaurants, Chand Palace. Chand Palace originally opened its doors in 1986 and has been a staple of Parsippany ever since. You must be doing something extremely right to survive 36 years, specializing in vegetarian Indian cuisine, in a community with multiple outstanding Indian restaurants, and with a population of over 20% people of Indian American decent, with discerning taste when it comes to authentic food.

It was my first visit to Chand Palace, after hearing so many suggestions and positive comments about it, I had to stop in. Chand Palace has recently changed hands as of October 2021, and is now owned by Manan Saxena, who is carrying on the restaurant’s legacy by serving only the finest, freshest, authentic, vegetarian cuisine. Mr. Saxena’s passion to provide a superior dining experience was evident during our conversation and I will get back to our conversation a little later in this review. 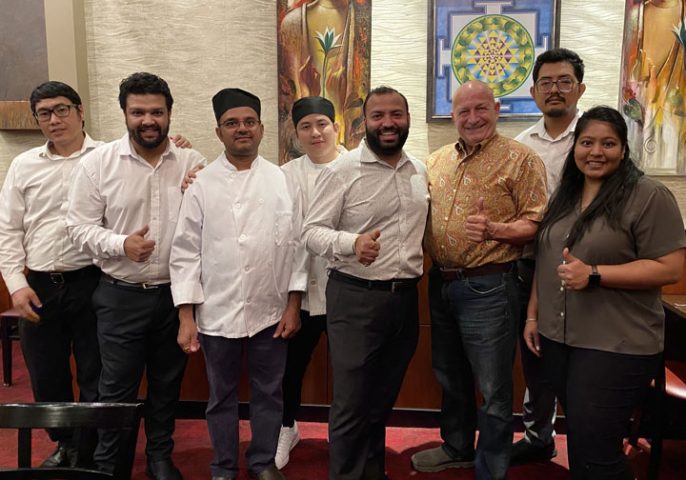 Pulling into the strip mall parking lot, Chand Palace is situated in the middle of several other Indian markets and businesses. The unassuming facade certainly was not indicative of what one will find once inside. On entry, I was pleasantly surprised with the casual yet upscale, stylish, modernistic, dining room that immediately caught my attention. Our group was warmly greeted by the welcoming staff, as Manager Sarok Shrestha, offered us a table of our choice. We were led to one of the many attractive gold leaf and black trimmed tables, set for four, arranged perfectly, with sparkling glass and silverware. Chand Palace is a BYOB, so we did bring our own wine, which was uncorked and poured without delay. Our server, Itika, could not have been more attentive, helpful or pleasant.

The carefully prepared buffet set up, arranged near the rear of the dining area, was appealing. There was an abundance of fresh foods, lots of color and pleasing aromas, with a lavish variety of vegetarian cuisine. I counted over fourteen cold and hot entrée choices, five desserts, ice cream, and soup. Chand Palace is known for their buffet, and it appeared that every diner had come in just for that. Our server, Itika, suggested that we try the buffet so that we could get a nice sampling of the various dishes offered. One can also order straight from Chand’s full and extensive menu if that is your preference. We all decided to go with Itika’s suggestion, and it was a good decision!

Of note, the buffet changes its selections on a revolving basis. Lunch is different from dinner, and it is different every day of the week. Selections are chosen from all the different geographical areas of India so you may be served food from southern India on one day, and from the north on another. There are also Indo-Chinese dishes incorporated in the buffet. To ensure authenticity the kitchen staff is comprised of Chef’s from all the different sections of India.  There is even a Chef who specializes in just Indo-Chinese cuisine. This revolving style of service obviously keeps everything fresh and full of flavor. Like the owner told me, “I want to bring every part of India to your table.” One of my guests, Marko, made the comment, “I have never experienced any other food with so much flavor as Indian food.” As we meticulously worked our way through the buffet, dish by dish, we could clearly detect the distinct tastes of sweetness, bitterness, sourness, saltiness, cool, and spicy hot. It truly was like getting all the tastes of India in one sitting. No shortage of taste sensations here, and I think your palate will thank you for it. It is a misconception that Indian cuisine is always spicy hot. It is the spices that provide the flavor to the food, not the heat. Like any cuisine, if you want the heat level brought down on any dish, the restaurant will be glad to accommodate your tastes. 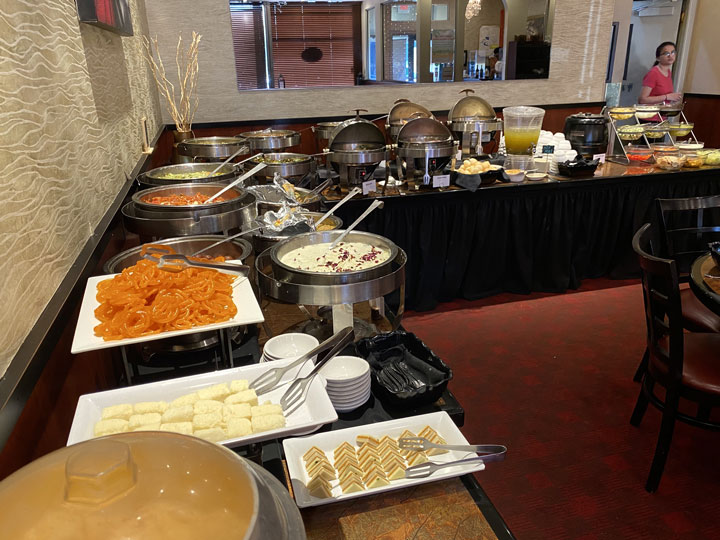 I consider myself a carnivore, but I was very satisfied with this full vegetarian meal. To authenticate the vegetarian status of the food the Chef’s do not even utilize eggs when preparing their dishes. The buffet consisted of Tom Yum Soup, Chana Masala, Spring Rolls, Jalapeno Cheese Samosas, Malai Kofta, Vegetable Hakka Noodles, Jeera Rice, Aloo Tikki, Bhindi Masala, Dal Makhni, Saag, Dal Makhni, Thai Green Curry, Vegetable Fried Rice; and for dessert Gajar Halwa, Gulab Jamun, Ras Malai, Jalebi, Indian Sweets, and Ice Cream. Garlic Naan and Chole Bhature (Curry Bread) also came with the meal. We all went up several time to try to sample everything we could, until we just could not take another bite. It was a great dining experience.

I did get an opportunity to sit down with owner/restauranteur, Manan Saxena, for some quick background information. Mr. Saxena, a very friendly, personable, and enthusiastic man, was born in Jaipur, the capital of India’s Rajasthan state. Jaipur is famous for its traditional cuisine, as well as for its spices and sweets.

He was born into a family with a long history in the food industry and that is where his love of food began. He arrived in America in 2009, where like many a great restaurateur learned his trade from the ground up. Following jobs as a dishwasher, busser, hospitality assistant, and assistant manager to a restaurant, he began fine tuning his trade as a catering manager.

Mr. Saxena utilized his growing knowledge, skills, abilities, and passion to eventually lead him to his first venture, Chand Palace, taking a dangerous chance and opening it during the pandemic. When I asked him why he would take such a chance, he stated, “I was an Indian boy who came to America with a lot of dreams. You can fail one time, you can fail two times, there’s always a light at the end of the tunnel.  I took a chance opening Chand Palace at the end of the pandemic based on my faith and ability on Indian food and culture to succeed.” “This Country gives you a lot, it is like a force of water; you have to drink it, the opportunities are there.”

Mr. Saxena will be opening his second restaurant, AAZ (own style) on December 1 in Franklin Park.

If you are a vegetarian, I would think this is the place for you. If you have not tried vegetarian cuisine of India yet, I would suggest you stop in and give it a try. I am sure you will enjoy the experience, and believe me, you will not even notice the absence of meat.