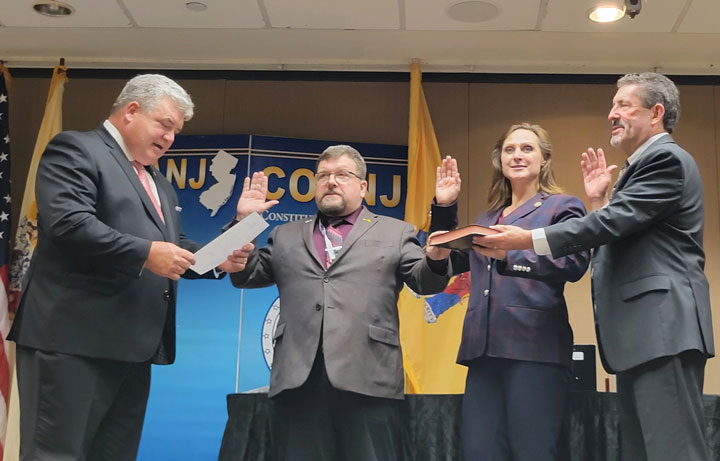 MORRIS COUNTY — Surrogate Heather J. Darling, Esq. was named Vice President of the Constitutional Officers Association of New Jersey (COANJ). After completing her term as Secretary of COANJ and Section Chief of the Surrogate’s, Surrogate Darling was nominated and elected to the new position by the organization and took the oath as Vice President at the Annual Conference held in Atlantic City.

COANJ is the formal organization of New Jersey Sheriffs, County Clerks, Surrogates and Registers of Deeds and Mortgages elected directly by the people of each of the 21 New Jersey counties.

“It is an honor to have been selected as Vice President by my peers in the Constitutional Officers Association of New Jersey. I enjoyed my time as secretary and look forward to taking on the challenges of the position of Vice President as I assist newly elected President Sheriff Michael Mastronardy in his leadership of the Sheriffs, Clerks, Registers and Surrogates of the State of New Jersey,” said Surrogate Darling.

Darling went on to say, “I was proud to serve as the Surrogates Section Chief for the past term and the two-day Surrogates program we put together and held at the annual conference was challenging and productive. I pass the torch to my successor Middlesex County Surrogate Claribel Cortes.” In Surrogate Darling’s words to Surrogate Cortes, she congratulated Cortes on her new position and emphasized how confident she is that Surrogate Cortes will continue to lead the Surrogates in taking on a more active role in improving their association and the way business is done with their offices.

COANJ organized in 1920 and its members work in cooperation to improve services rendered to their respective counties. COANJ members meet regularly on matters of importance relating to the management of their offices; to provide feedback for legislation in relation to the conduct of all the statutory requirements and duties relating to the offices of the Sheriffs, County Clerks, Surrogates and Registers of Deeds and Mortgages in the State of New Jersey and to encourage and maintain high standards of service. Surrogate Darling congratulates outgoing President Monmouth County Clerk Christine Hanlon for her leadership this past term. “I appreciate the time and effort it takes to steward a statewide organization and I thank those who have served. I look forward to working with COANJ’s new President Ocean County Sheriff Michael Mastronardy; new Secretary Somerset County Clerk Steve Peter; and Treasurer Cape May County Surrogate Dean Marcolongo,” said Surrogate Darling.

For more information on the Morris County Surrogate click here.