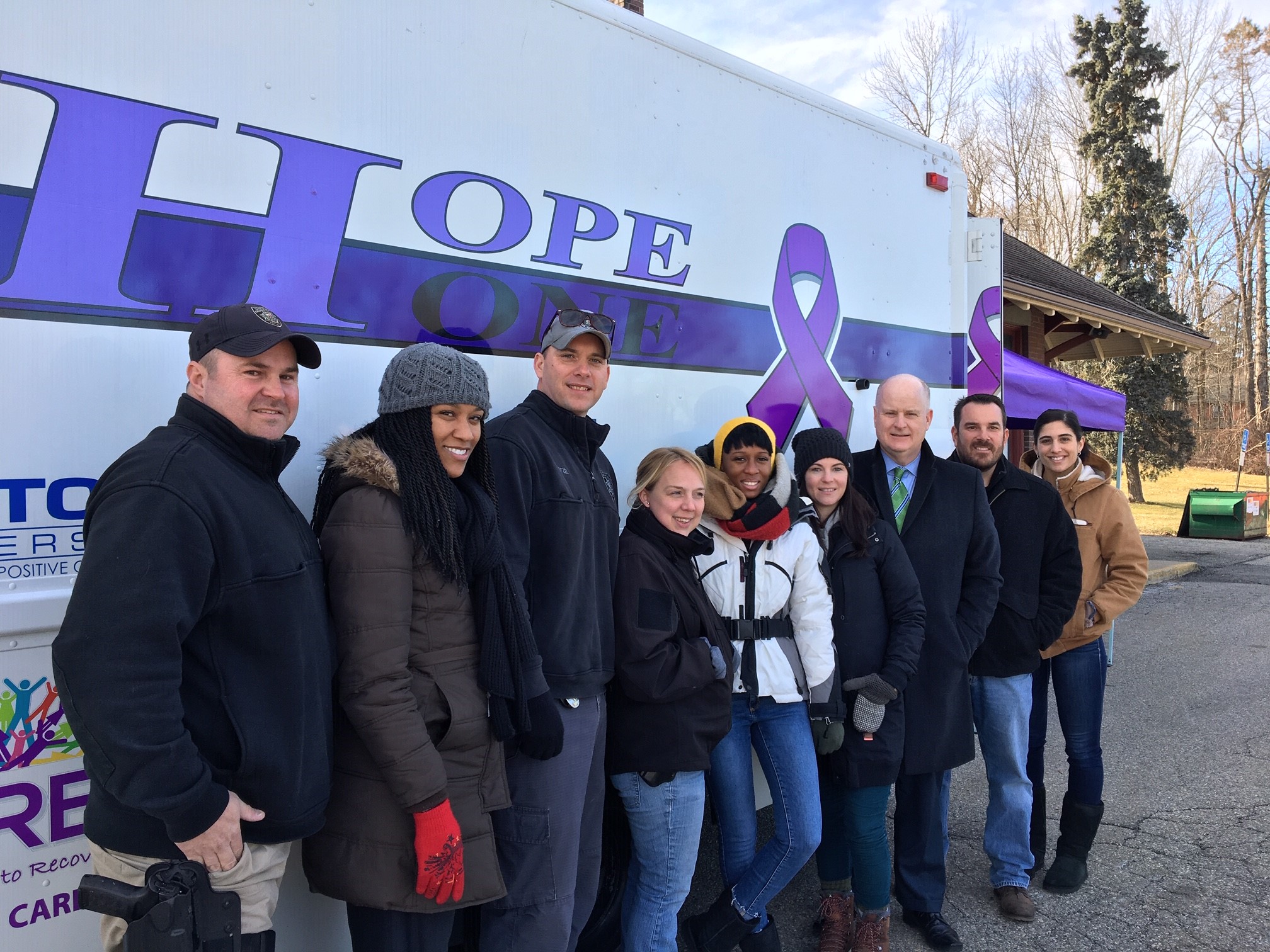 Hope One, which in the past 21 months has logged more than 6,000 contacts with individuals struggling with addiction or their families and friends, was parked Monday outside the Netcong Train Station, where Sheriff Gannon met with four law enforcement officials from Burlington County.

Hope One already was replicated by the Newark Police Department in December and earlier by the Cape May Prosecutor’s Office and Monmouth and Atlantic County Sheriff’s Offices.
Burlington County Sheriff’s Office Chief Mike Ditzel said he heard Sheriff Gannon speak about Hope One at a New Jersey State Chiefs of Police Association meeting last fall, admired the concept, and believes Burlington County can be successful with the same proactive approach.

“This could potentially be a great addition to other programs we have, including youth programs to help stop addiction before it starts,” said Burlington County Prosecutor’s Office Chief of Investigations Darren Anderson. “We bring services to the client, out in the field,” Sheriff Gannon told the Burlington County officials. “It’s successful because of relationships we have with the service providers.”
Sheriff Gannon noted that 3,118 people statewide died of overdoses in 2018, a 15 percent increase over 2017 but Morris County saw a 1 percent decrease in overdoses in 2018 from the previous year. There were 84 deaths attributed to overdoses in 2018 in Morris County.
The sheriff related to the Burlington officials how a father approached the Hope One vehicle on Jan. 7 with a story of concern that his son, just home from a rehabilitation center, would relapse. The father was trained by Hope One staff to administer Narcan, a nasal spray that reverses the effects of opioids, and given a canister to bring home. He found his son unconscious from an overdose in their home the same day and was able to revive him with Narcan, the sheriff said.

There’s a cascading impact on families, the children, parents, spouses and siblings of addicts, Gannon said.

Since April 3, 2017, when Hope One made its debut on The Green in Morristown, the vehicle has made about 270 stops in locations throughout Morris County that statistics show are populated by at-risk people and where drug overdoses are occurring. Sheriff Gannon said 200 people who boarded Hope One in search of services were transported to treatment for mental health issues or to detox centers and treatment facilities for their substance abuse addictions.

Hope One was staffed during the visit by Burlington County officials by Morris County Sheriff’s Office Corporal Erica Valvano in plainclothes; Kelly LaBar, a peer recovery specialist for Morris County CARES; Madine Despeine, director of Self Help, Advocacy and Education for the Mental Health Association of Essex and Morris; and Ashley Reed, a care navigator for Family Promise of Morris County.

In nonjudgmental style, the staff offer literature, resources, Narcan training, coffee, water, hand warmers and snacks to visitors to Hope One, and are equipped to immediately help individuals find treatment for their addictions.

The Hope One vehicle used to be a Sheriff’s Office SWAT truck that was stripped of law enforcement emblems and painted white and purple, the color symbolizing recovery. Hope One parks Mondays and Thursdays for about five hours in selected locations where at-risk people are known to congregate.