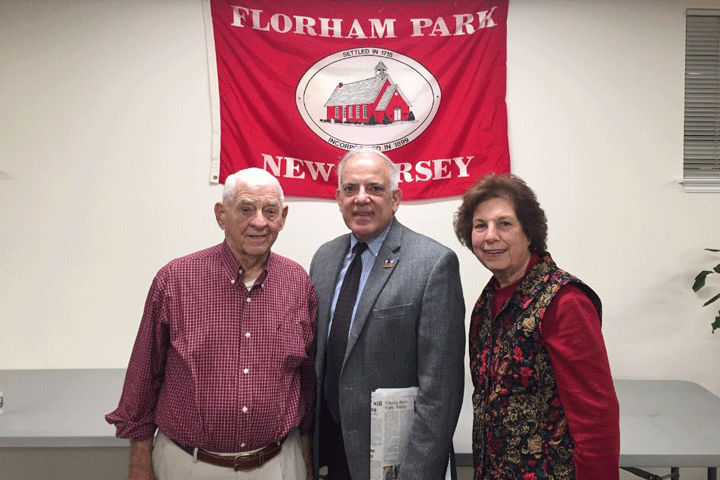 FLORHAM PARK — The Historical Society of Florham Park announces their next program will be on Tuesday, November 19. It will feature Joel Farkas speaking about George Washington, New Jersey and the Revolutionary War.

Farkas volunteers at the Morristown Historical National Park. That is followed on March 17, 2020, by Carol Simon Levin “Pickets and Persistence: War Service and Women’s Suffrage”. The next one is the following month on April 21, as Michael Gabriele returns to the Florham Park Library to share “More New Jersey Diner Stories”. The Spring then continues with a presentation by a local favorite Jim DelGiudice in “Where American Shopped for Value: The Sears and Roebuck Story”.

The Historical Society of Florham Park was proud earlier this month to host local 95-year old resident, Dr. Bob Newhouse, in recalling his experiences during World War II and at the Battle of the Bulge. Approximately 100 people packed the Akhoury Room at the Florham Park Library on Tuesday, October 8.

Newhouse was one of 600,000 American troops involved in the Battle of the Bulge in which 87,223 American men were killed, wounded or captured 75 years ago. Bob earned a Bronze Star. He also was a recipient of a Purple Heart, as he was wounded by shrapnel as the German army retreated.

Many in the audience were his friends from over the years from the Florham Park Fire Department, the Historical Society, and more, and some were his students from his 58 years as an educator in Florham Park, Madison, Kean University, Fairleigh Dickinson University, and the College of Saint Elizabeth. He also was Florham Park’s first Recreation Director. He commented on how happy he was to see everyone there as he knew most of the 100. When he closed out his hour-long presentation, he received a heartfelt “Thank you for your service!” by Peter Nicolas, Vice President of the Historical Society of Florham Park which was followed by a resounding ovation by the entire audience.

Area Students Included in MPAC Music Students of the Month