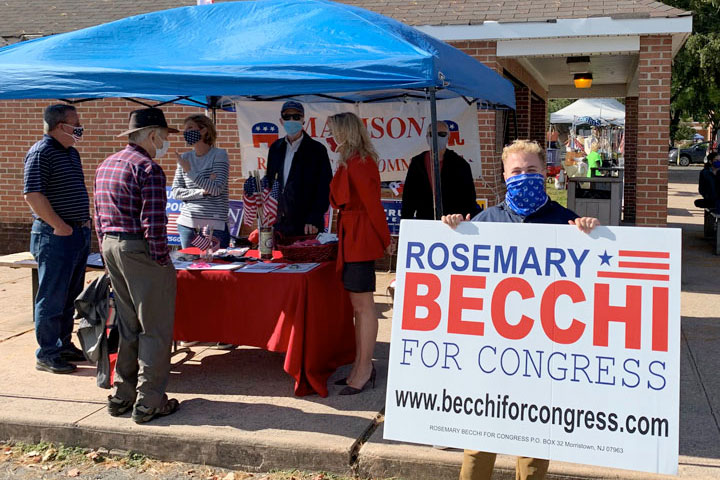 MADISON — At the Madison Farmers’ Market on Thursday, October 8, the Republican challenger for the NJ CD-11 Congressional seat Rosemary Becchi met with Madison residents as they did their weekly produce shopping.  According to Madison Republican Committee representative Suzanne Schreiber, shoppers this week were not hesitant to express their opinions about the need for new representation for NJ CD-11.

“Overall, people we talked with throughout the afternoon are ready to speak up and be heard. They are tired of Mikie Sherrill. They came out to meet Rosemary and to hear her priorities for NJ CD-11.”

Alison Spatola, who co-organizes the Republican booth at the Farmers’ Market with Suzanne Schreiber, echoed Schreiber’s comments. “A couple of women voters who stopped by our booth told us that they voted for Mikie Sherrill two years ago because they thought she was a moderate. But now they see that she votes 99 percent of the time with the radical left, right alongside Nancy Pelosi, and they are disappointed – more than disappointed, in fact – these women told us they are outright annoyed and feel betrayed by Sherrill. That’s not what they want for CD-11, and it’s not what Sherrill said she would do.”

“In contrast, Rosemary Becchi is very up-front about her passion for fighting for families, and all the voters we spoke with like that about her. She is an author of the College Savings 529 plans that have helped millions of families save for their children’s education. Rosemary is not afraid to support the men and women who are in law enforcement, rather, she stands beside them and supports law and order in our communities.  These are the priorities that matter to the voters we met today.”

Madison Borough Council candidate Mackaella Goodwin added that Rosemary is also “a staunch advocate” for people with disabilities. “Rosemary spoke with several Madison voters today, as well as last week when she was also here in town, about her policy initiative focused on prioritizing the disabled, the Bill of Rights for All Individuals with Disabilities. She really does put ‘people over politics,’ just like she says, and she is truly committed to fighting for the most vulnerable. I admire that about Rosemary, and I share her enthusiasm. Rosemary and I are both are impacted by the challenges of dealing with special needs within our own families, and we understand how resources and good policy can help this underrepresented population.”

“Also, like Rosemary, my running-mate Michael Dailey and I support the law enforcement personnel who serve our community, who are always the first to respond to our neighbors’ calls for help. Michael and I are very open about the fact that we stand behind our Madison Police Department, fully funded.”

Not only are voters annoyed about Mikie Sherrill, but they are also “fed up with Governor Murphy,” said Schreiber.  “They are frustrated and furious about Governor Murphy’s incessant tax hikes. It seems like there’s a new tax introduced here in New Jersey every day, and the people who spoke with us today have had enough. They were interested to hear about the work Rosemary has done with Jersey First, a non-profit that she founded to advocate for lower taxes and pro-business policies.  Rosemary is the kind of person that they want to see representing them, someone who will fight for lower taxes for New Jersey families, and who will advocate for policies that make it easier to do business in our state.”

“Visitors to our booth today complained particularly about Governor Murphy’s tight restrictions on businesses during the pandemic,” continued Schreiber.  “Simply stated, they have had enough of the shut-down, and they want New Jersey open for business again.  They want to see all their neighbors back at work and school and living a normal life again.”

More than anything, however, Schreiber and Spatola agreed, the voters they spoke with are mad at Governor Murphy for his executive order that mandated a Vote By Mail election for New Jersey.  “Over and over, we hear voters complaining that ‘This election is going to be a mess’ and ‘I worry about my ballot’ and ‘Look at the voting fraud that just happened in Essex County’ and ‘Governor Murphy needs to go.'”

“Suzanne and I feel similarly,” said Spatola “but we tell voters that they need to use their Vote By Mail ballot this year, even if it upsets them. They ask us, ‘Do we really have to use the mail-in ballot?’ and we answer ‘Yes.’”

Schreiber added, “Unfortunately, New Jersey voters will not be able to vote at a machine this year. There will be just one in-person voting location in Madison, and any in-person votes will be provisional ballots only. There will be very few exceptions for visually-impaired persons only. This is the reality.  This year, the best way to ensure your vote will count is to use your Vote By Mail ballot.”